OAuth2 with PKCE for Mobile Apps and Single Page Apps

In this article we will cover best practices for OAuth2- and OpenID Connect flows for mobile apps and single page apps (SPA).

Before reading ahead, keep in mind that OAuth2 and OpenID Connect are delegation protocols. OpenID Connect is useful when you want to become a "Sign in with ..." provider like Google or Twitter. If you plan on allowing third party developers access your user's data with their consent (e.g "Access to your private repositories"), OAuth2 is the correct choice. Using these two protocols in first-party scenario, for example OpenID Connect to attempt and solve "SSO", can become quite complex due to several conceptual limitations.

If you are looking to solve authentication (login), sign up, profile management, and more check out the Add Authentication to your React Native App article.

Read the introduction to OAuth2 and OpenID Connect if you need a refresher.

You can choose from several OAuth2 flows (e.g. Resource Owner Password Credentials, Implicit, Authorize Code). Let's exclude the ones which should no longer be used.

Second, you will be introduced to the OAuth2 Authorize Code flow with Proof Key for Code Exchange (PKCE) for public clients. Third, you will be supplied with links to open source software capable of solving the introduced flows and features.

This flow was built into OAuth2 to help old systems migrate to OAuth2 authorization without changing the user experience flow. Because the user enters his/her credentials directly into the client's UI, it would be possible for third parties to phish the credentials. You should never allow third party developers to use this flow. Additionally, OAuth 2.1 is going to remove this flow.

Second, the OAuth2 Resource Owner Password Credentials Flow is not compatible with OpenID Connect. If you rely on OpenID Connect ID Tokens for your login sequence, you can not use this flow.

Third, if you use OAuth2 as an SSO mechanism (e.g. having multiple mobile apps which all use the same OAuth2 server to authorize), the OAuth2 Resource Owner Password Credentials Flow opens up potential attack vectors such as phishing: Let's assume you have published 15 mobile apps (e.g. "game cloud - world's best freemium games") which all use the OAuth2 Resource Owner Password Credentials Flow to access the user's profile and game data at "game cloud". Your users are used to entering their "game cloud" credentials in the game's UI. An attacker could write a 16th app, with a similar publisher name (e.g. "game cloud enterprise"), and trick your users into entering their "game cloud" credentials into the malicious app.

Similarly, an attacker could publish a counterfeit app with a similar name and the same UI, which phishes for user's "game cloud" credentials. The user is not able to distinguish the login screen in the counterfeit from legitimate apps, because there is no domain name, no TLS certificate, and more broadly no trusted environment (browser). If the attackers can push a counterfeit app to the app store, users - used to enter their credentials in the app - will not become suspicious.

Let’s take a look at an example. The two screenshots below are from two different apps. The one on the left is the original app, the one on the right the counterfeit one. Can you spot the difference? Me neither, it’s a perfect replicate. There are, of course, some limitations to this attack. For one, the counterfeit app has to make it on the user’s phone. Unfortunately, counterfeit apps are so common, there’s even an article on Lifehacker (“How to Spot Fake Apps in Apple's App Store and Google Play”) on this topic.

If a browser is involved, the user will see the URL and be able to validate the TLS certificate if in doubt. Let’s take a look at the two login screens again, but this time in a browser. You should be able to spot which one is the phishing site and which one isn’t.

It becomes apparent that you should train the user’s eye and opt for authentication & authorization through a trusted environment: the browser.

The OAuth2 implicit Flow was the go-to flow for mobile apps, single page apps, and native apps. The IETF summarizes this flow as follows:

The most prominent downside to this flow is that no refresh tokens may be issued. Every time an access token expires, the user must redo the whole authorize dance (open browser -> authenticate -> authorize) - not a great user experience.

Another issue is that Proof Key for Code Exchange (PKCE) can not protect the OAuth2 Implicit Flow. The IETF explicitly states that this flow is not recommended for use with native & mobile applications:

In the context of browser apps (“single page apps”), the OAuth2 Implicit Flow was designed when most browsers did not allow developers to modify the history via, for example, `pushState`. Back then, using hashtags was the only way to transmit data via URLs to JavaScript applications running in the browser. Today, as browser APIs improved, it’s possible to use the OAuth2 Authorize Code Flow for browser apps instead, and benefit from, e.g., refresh tokens.

Implicit flows are scheduled to be removed in the OAuth 2.1 specification.

The IETF encourages developers to avoid embedded user agents, sometimes referred to as web-views, and use external user-agents, typically the browser. Here is why:

In typical web-view-based implementations of embedded user-agents, the host application can record every keystroke entered in the login form to capture usernames and passwords, automatically submit forms to bypass user consent, and copy session cookies and use them to perform authenticated actions as the user. - Source

Use OAuth2 with PKCE instead

Now you know what to avoid. Let’s talk about what to do instead!

The OAuth2 Authorize Code Flow provides the means for clients, which can not keep passwords secret, to request authorization on a user’s behalf. This is possible with a public client. The only differences between confidential (regular) and public clients are that no secret was issued to that client, and that the client is explicitly intended for use with mobile, browser, and native apps.

Public clients are capable of performing all flows except the Resource Owner Password Credentials flow and the Client Credentials flow. They are also allowed to request OpenID Connect ID Tokens, and refresh expired access or ID tokens. Other than the missing client secret, the flow is executed in the same way as the regular OAuth2 Authorize Code flow. It is recommended to send the client ID in the POST body or the URL query, as HTTP Basic Authorization does not work well (if at all) with an empty password field

The OAuth2 Implicit and Authorize Code Flows are vulnerable in the context of mobile and native apps, specifically when custom redirect URI schemes are used that are not protected by Transport Layer Security (TLS).

If an attacker manages to register a malicious application on the client device and registers a custom URI scheme that is also used by the legitimate application, it is possible for the attacker to intercept the authorize code and obtain its access token. 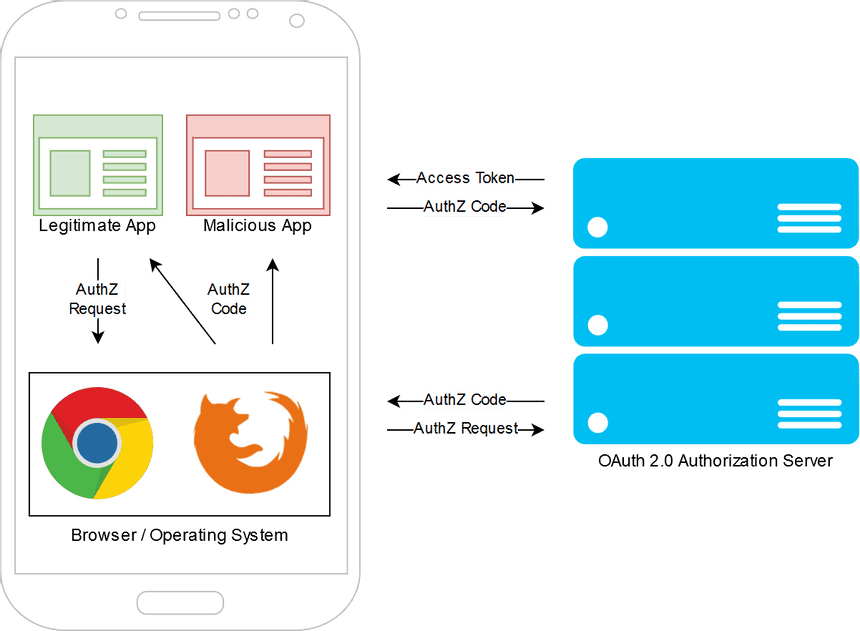 OAuth2, OpenID Connect, PKCE, JWTs, … - these standards as useful as they are complicated. It is well known that developers should never roll their own crypto, unless of course they are a cryptographer. The same should apply to these standards. I strongly encourage everyone in the community to rely on adopted, tested, and reliable open source technology. These topics have been covered in various programming languages and are easy to integrate.

Ok, so let’s take a look at what technology you can use to provide and consume OAuth2, OpenID Connect, and Proof Key for Code Exchange (PKCE). Some of the technology presented is written and maintained by ORY. Everything is licensed with the Apache 2.0 License.

ORY Hydra is an OAuth2 and OpenID Connect server that integrates with existing identity management solutions. It supports all features presented in this article. To get started with ORY Hydra check out the 5 Minute Quickstart!

AppAuth is a Google-authored client library for Android and iOS that supports public clients and PKCE.

Open Source and other Resources

Besides the obvious ones like Stackoverflow or Reddit, you can ask questions related to these topics at ORY Hydra GitHub Discussions or in the Ory Community Slack.

Thank you for reading! I hope you learned something useful! If this was of any help, you can follow me on GitHub and Twitter and see what I’m up to next. If you wish to support ORY’s mission of making secure developer tools affordable and accessible, consider supporting us on Patreon.

Ory ships regular product patches and updates. Subscribe to our newsletter to get the good stuff, and stay up to date.